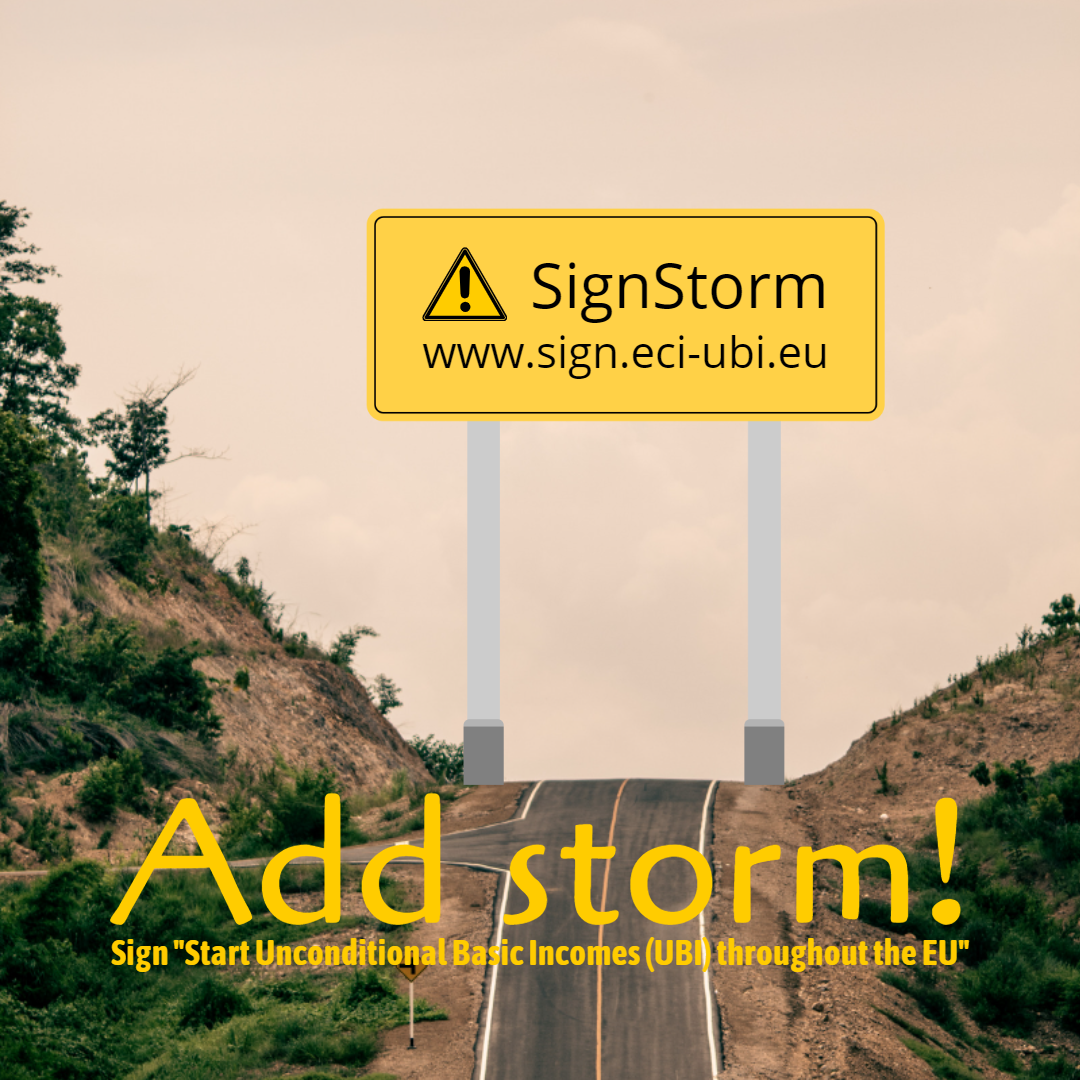 Citizens of the European Union,

it is time to provoke the Storm of Signing – put aside the last hesitations, support the European Citizens’ Initiative “Unconditional Basic Income Across the EU” and call others to do it. This is the last chance to do so in the coming month. And last chance in the coming years to bring UBI directly into EU politics.

Your signatures are a demonstration, a message above all to the governments of your own countries. The number of signatures from the citizens of your country is the most telling message – you can no longer wait with UBI. There is no longer a question of “whether”, only a question of “how”. This became clear already at the beginning of the Covid-19 pandemic.

Such social policy reforms are an exclusive national competence and therefore we cannot require a single, pan-European UBI. However, it is up to Brussels to take a step towards initiating the process. That is the direct aim of the initiative.

If the initiative receives the required million signatures and the Commission does what the initiators expect, it will in turn be an encouraging message to the Member States: UBIs in your countries are welcome and Brussels will do its utmost to ensure that their implementation runs smoothly and without confusion.

Time is running out. Jobs become automated and paid employment can become a privilege faster than we dare to admit it. Nothing protects us from further quarantine times. In such times, it is important that providers of vital goods and services maintain their income base (consumers with basic ability to purchase), that companies which go on forced leave do not have to beg for wage subsidies from the state or close their doors forever, and most importantly, that households do not accumulate unpaid bills.

However, UBI cannot be a temporary solution. A person must always have the right to say ‘no’, and this is only guaranteed if his or her basic, dignified livelihood is guaranteed. Only then can we say that one has freedom of choice. Trafficking in human beings, the sex trade and “troll factories” in the interests of hostile countries do not dry up with mere condemnation or police action. They should not be able to hire peope due to the lack of such vulnerable people who cannot refuse their offer.

We have nations for whom a positive birthrate, at least at the recovery level, is existentially important. It is also important regarding the world’s cultural diversity. UBI, if it is available to any individuaal from birth,  is the only possible measure to create needed conditions. If every member of the family is in a life jacket, then whole family, no matter how big, is in a life jacket. The family’s ability to cope must not depend on whether its members are successful in the labor market or in the business world or are losers. There must be no economic barriers for families to having as many children as they dream of, be it lack of money or insecurity about the future.

UBI is a solution to security, society and the sustainability of nations. We encourage our countries to implement it. This time through Brussels.

And we will not forget the rest of the world. If we are successful, it will also boost basic income movements outside the European Union.

Let’s go give SignStorm a power!