New survey: Citizens still do not know their rights of codetermination in EU politics

A European alliance of 17 European Citizens’ Initiatives and organizations is calling for the official extension of Europe Day on 9 May to “EU Sign Day” in order to strengthen citizens’ participation in European Union policies.

With a level of awareness of 2.4%, the European Citizens’ Initiative (ECI) as an instrument of political codetermination in the European Union is almost unknown among the population, according to a current representative YouGov survey in Germany, Italy, Finland and Portugal.

If one million valid signatures are obtained across the EU, citizens can submit their proposals for new laws directly to both the EU Parliament and the EU Commission. In addition to the hearing, both institutions are obliged to submit a written statement. This makes it much more effective than, for example, a petition to the Bundestag.

An ECI must be registered by a group of at least seven organizers across the EU. The collection of signatures is limited to one year, is also possible online and must meet a minimum quorum in at least seven EU states.

“There also needs to be sufficient financial support for European Citizens’ Initiatives for infrastructure and professional support. Citizens cannot do this on a voluntary basis if there is no large organization behind it” explains Ronald Blaschke from the EU organizing team of ECI UBI and coordinator for Germany.

Since its introduction in 2012, only six (of the 78 red.) European Citizens’ Initiatives have been able to clear the high signature hurdles. “If the EU Commission takes people’s participation opportunities seriously, it must take much stronger measures to ensure successful implementation and to raise awareness of the ECI as an effective instrument of political co-determination in the EU” demands Klaus Sambor from Austria, one of the initiators of the ongoing ECI for Unconditional Basic Incomes (UBI) throughout the EU, which has collected around 117,000 signatures since September 2020.

The EU-wide alliance, which as an immediate measure calls for the establishment of 9 May as “EU Sign Day” consists of: ECI Unconditional Basic Incomes throughout the EU, ECI StopGlobalWarming, ECI Voters Without Borders, ECI Freedom To Share, ECI Save Bees and Farmers, ECI Reclaim Your Face as well as 11 other civil society organizations in the EU. 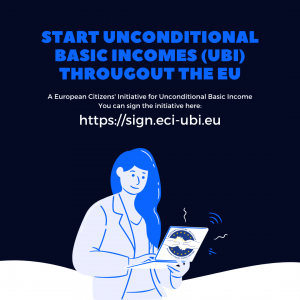 For the European Citizens´ Initiative (ECI) for Unconditional Basic Incomes (UBI) in the EU we have good news: The EU Commission has extended the time period for collection signatures for our ECI by 3 months.

That means the signing of the initiatieve will end 25th December. 2021

The reason for this is given by the Corona-situation, where it is not so easy to come in contact in public with people to make them aware of our ECI.

The European Citizens´ Initiative for Unconditional Basic Incomes is the only oneregistered by the EU for UBI. It is the only one which has also concrete legally determined law-consequences – when the ECI is successful.

I you have ideas for pictures or want to have a translated picture text, please contact us via the contact form.

All images are made by our team on canva.com. Read the Free Media License Agreement for Canva designs.